In 2001, the National Institute of Neurological Disorders and Stroke (NINDS) organized the Committee to Identify Neuroprotective Agents for Parkinson’s (CINAPS) to test a list of potential drugs for neuroprotection against Parkinson’s disease that were tested on several clinical trials through a period for about 15 years. From this list, we identified agents that most likely are not futile (those drugs that showed a statistically significant improvement in at least one clinical trial). This yields the Coenzyme Q10 and the Creatine. We conducted two systematic literature review and meta-analysis of published clinical trials about Coenzyme Q10 and creatine for the neuroprotection against PD. We searched multiple medical electronic databases for all published clinical trials about these drugs. We retrieved the records from the medical electronic databases, and we screened them to select the most relevant clinical trials. The methodology of these clinical trials was assessed for the possible risks of bias according to the Cochrane Risk of Bias assessment tool for randomized controlled trials. Then, data of these clinical trials were extracted and analyzed (pooled together) in a meta-analysis model to give a combined estimate. Results showed that both drugs are not effective in treating Parkinson’s Disease.

For agents that had been already introduced to clinical trial phase, we used qualitative and quantitative evidence synthesis methods to analyze published pre-clinical and clinical data and synthesize evidence about Parkinson’s disease treatments and risk factors. This evidence guides decision making in clinical practice and other researchers to run future clinical trials.

Summary of the Significance of the Work:

This project is important to my field because

Summary of the Implementation/Influence of the Work

Our work was cited to provide evidence that Coenzyme Q10 is not effective for treating Parkinson’s disease.

Our work was cited to provide evidence that Coenzyme Q10 is not effective for treating Parkinson’s disease.

[3] The Linus Pauling Institute Micronutrient Information Center at Oregon State University provides scientific information on the health aspects of dietary factors and supplements, food, and beverages for the general public in the United States (https://lpi.oregonstate.edu/). In their guide about the dietary information of Coenzyme Q10, under the section entitled “Parkinson’s disease”, they cited our meta-analysis to highlight that there is no evidence that coenzyme Q10 improved motor-related symptoms or delayed the progression of the Parkinson’s disease when compared to placebo.

Our work was cited to provide evidence that Droxidopa should be used as a treatment for neurogenic orthostatic hypotension (which leads to syncope*). 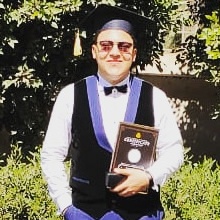